If we need to create a safe and respectable future for our young Indians, we need start the right education from schools.

If Indian schools want their students to be the best, they must educate their teachers and teach students to be compassionate, inclusive, open minded and humane with higher values. They must teach the children about gender equality and gender diversity and it must be a priority in Indian schools.  It must be included as a part of the education curriculum.

Traveling around India speaking, advocating for transgender people’s rights and sensitizing thousands of university and college students, I strongly believe, if we want our children to be confident and exercise their rights of equal opportunities fearlessly, if we need to curb the violence against women, if we need to stop rape, if we want our young men to value women and womanhood, then we MUST teach the young Indians about gender diversity and gender equality. I always say in my speeches, ‘A society which respects and values women, will respect and value transgenders and third gender people’. If todays’s youngsters have the right knowledge about genders, they will treat women as equals and not as objects of pleasure and to be used and discarded.

It pains me to see transgender people beg for money from shop to shop, in the trains and public utilities. It pains me to see them queuing up to pick up clients for sex work. Majority of them are not qualified enough to go for a better job and have a better livelihood. The livelihood opportunities are very limited, the major reason is that majority of the transgender population are school drop outs. They are unqualified to pursue white collar jobs. The only well paying profession is sex work. So they opt for it. Eventually they are unable to come out of this vicious circle and continue to do this till they are wanted.

If India needs to change, the teachers can be the catalysts of change.  I have an urgency about addressing the desperate situation of teenagers at school who may be gender non conforming. I prioritize it as higher importance.

In their Approach Paper on Education and Employment opportunities & Challenges for Transgender presented to the Ministry of Social Justice, Government of India, Dr Rajesh (Head) and MD Aslam Naved(Research Scholar), Faculty of Social Science from University of Delhi have mentioned the following:

Today the society looks so cheaply on transgender people who beg and do sex work. Do you know that we, transgenders, too were children once up on a time, we were teased, bullied or even abused at schools, rejected by our parents. Many of us wanted to continue schools and graduate, but those dreams were shattered, left in the vicious lurch of darkness with a very uncertain and insecure future.

If only those children were not bullied at schools, if the teachers had been supportive and caring towards them, if the families had accepted them as they are, they would not be living this lower self esteemed life, this feeling of being an out cast, this feeling of worthlessness would not have been there at all.

We keep creating generations of transgender beggars and sex workers by denying their opportunities. It is time we stopped it, the law and government are gearing towards helping those transgenders by legally recognizing us and passing bills at the houses for those who live in shackles to claim their space for equal opportunities at all spheres like any other citizen of India.

Law can protect us, but how far can a law or a bill change the stigmatizing behavior of the society? Can the government or judiciary bring the change in the mindset of a common man? How long will it take?

As a mother who could never be one biologically, and as a citizen of this country, I care to protect our gender non conforming children from stigma and discrimination and ensure a very safe, secure and happy life for them. I do not want to see another generation of beggars and sex workers. To achieve this challenging goal, it is of great importance to teach our children about gender diversity and gender equality. But how do we do it?

We do it in schools. Do we educate students? Yes, but before that we must educate the teachers. We, the people who work for the rights of gender non conforming people and transgenders, must consider the issue as prime importance and work on educating the teachers in schools all across India.

For the past  nine years, I have spoken at a number of academic institutions, colleges and universities across the country on transgender rights. Students and academicians raise all sorts of interesting questions on gender diversity and I answer them all. I think educating the educators is of prime importance presently as they need to completely understand the spectrum and fluidity of gender identity and sexual orientation. This understanding will help them to educate the students in the schools about gender diversity so that the students understand that “It is okay to be different” and will be tolerant and understanding those who are gender non conforming or transgender. 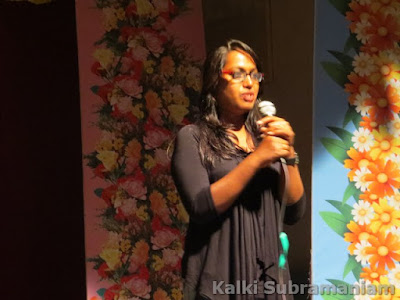 I was invited by a pioneering academic institution the Montfort International School in Yercaud. I visited the school in 2011 and again in 2013 for the a special lecture to the students on gender diversity. Speaking to students about gender diversity is a very challenging task. You need to get into their mindsets, speak in their language with out being offensive and tough. It was challenging for me but not for them. However, I was very successful in make them understand that gender is a spectrum and we must be open-hearted to accept everyone as who they are. They clearly understood my message, threw me all sorts of questions with a very humane and broad perspective. For me, as an activist, it was the richest and the most satisfying experience I had. Children are pure, more balanced and more open compassionate and friendly than most adults I have seen. 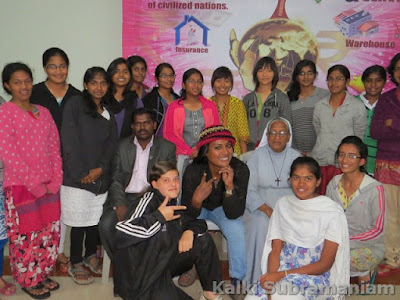 The love and affection children show me is something I can’t explain. They make me go breathless with their showers of sweetness. They have no reservations to accept me as I am. They see me as a person, not as a transgender. Isn’t that awesome?
Isn’t that great? If we teach them to be tolerant, compassionate, inclusive, look at things in a humane perspective, accept people as they are, not being bias with gender, caste, religion, race, skin color, economic value or health.

Where do they teach this education? I want to go back to a school where I can unlearn so many things I was taught and learn afresh. If children love me for the person I am, if they are able to see me beyond my ‘transgender’ identity, why is it so hard for adults to do it? Aren’t the adult minds saturated with poison of hatred and prejudice? When these people’s children grow up, these prejudices are slowly passed onto them and their mindsets too become narrow and short.

A teacher has a major role to play in teaching boys and girls to respect each other and acknowledge their equal space. Likewise, a teacher has a major role in making the children understand that India is not only a country with many languages, cultures, traditions and religions, India had a history in being tolerant, in accepting the different identities of genders of people and respecting their space in the society. 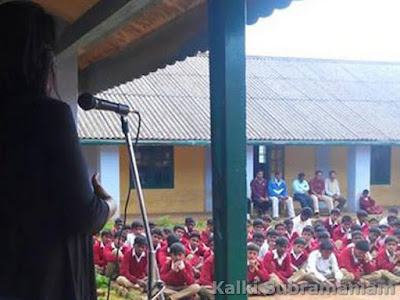 It is important to educate the teachers on gender diversity. Followed by Montfort, I had spoken at Vishwasanthi Vidyalaya Matriculation school at Kotagiri and also at the remote Nilgiris place Kil Kotagiri Government higher secondary school. Unlike Montfort, where children from economically sound families study, the students of Kil Kotagiri Government Higher Secondary School come from poor families from the surrounding small villages. Children are children everywhere. I was touched by their keenness in understanding transgender people’s rights and place in the society. The boys came up with so many questions on the social status of the transgender people. They were concerned about bringing solutions to poor transgender people’s problems. That noble thought of their was overwhelming me.

Chennai is the most tolerant city for transgender people in Tamilnadu, yet schools of Chennai had not taken up the issue of transgender to be discussed at school, and have yet to organize sessions on Gender Diversity. State Bank Officers Association School was one of the first schools in Chennai to organise such a sensitizing program on gender diversity for its students. I will be happy if other schools begin to organize such events and invite speakers to educate the students and faculties.

I appeal schools to:

Dear reader, the Change can be brought only by people like you and me. Let us be the catalysts of change.

About the Author: Kalki Subramaniam

Kalki Subramaniam is an activist, artist, author, actor and an inspirational speaker She is the founder of Sahodari Foundation which works for the social, economic and political empowerment of transgender persons in India. Kalki holds two Master’s degrees - Masters in Journalism and Mass Communication and Masters in International Relations. Being a transgender person, she grew up with stigma and insult when she pursued her studies, yet that had only made her a strong person and shaped her destiny. She fiercely campaigns for social, political, and economic equity and rights of transgender and intersex people. Kalki advocates nationally against discrimination and hatred against transgender and intersex people and voices for their inclusion at all levels. She has lectured in numerous prestigious institutions like IIT Madras, Jindal Global Law School, National Judicial Academy, Gauhati University, CET Trivandrum, SriRam college New Delhi and many more institutions across India. She has also represented India in seminars internationally. Her collection of poetry in Tamil titled 'Kuri Aruthean' was published by reputed publishing house Vikatan publishers. It has been hailed as an outstanding work of poetry. She is currently working two of her books, her first English book and her second Tamil book. She has received several awards for her contribution towards transgender rights, literature and art. Kalki was one of the major campaigners behind the Indian Supreme Court's verdict legalizing transgender identity in India. Know more visit www.kalkisubramaniam.com